A guide to facial exercise and skin care

My Picture and face issues, and can they be fixed?

Re: My Picture and face issues, and can they be fixed?

Tom Hagerty wrote: ↑Mon Apr 23, 2018 6:26 am Here's where Nonie and I disagree somewhat. Of course when you start a program you should follow the guidelines of the author. And most people feel comfortable with following suggestions for reps and sets and days of the week. But I think that as a person gets into a program, decisions become a personal choice. There comes a time for breaking away from the dictates of the originator of the program. Of course some people will tend to do too much or not enough, but eventually a workable regimen will evolve.

With regard to the italicized boldfaced line, I have to admit that even 25+ years into face exercising, I have never had the confidence to break away and take things into my own hands. I am thankful that I am able to reach out to the trainers of the programs I do because the continued guidance I get has served me well and I doubt I would have made the strides I have made if I had tried to figure things out on my own.

For example in 2015, I happened to notice that my face was asymmetrical. Ironically, this was not something new. It was always there but somehow I had missed it. Now my assumption was I was chewing more on one side than on the other. Nevertheless, I mentioned it to the author of CFF--the other program I do--and to my surprise she actually had some bonus exercises for me to do. I already do the foundational program and had added all the bonus exercises she has recommended along the way.

Now, when I pointed out the asymmetry, I was not asking how to fix it. Just sharing an interesting discovery. I didn't think there was anything that could be done, short of me trying to pay attention to which side I chew with more and working on using the other side just as much the regular side. And I suspected I was the only one who could notice the asymmetry so it was not such a big deal.

Now notice what my logic told me: that the asymmetry means one side is being worked in some way that is different from the other by daily living. So surely balance would come if I paid attention to my habitual muscle use and reversed it, whether it be how I chew...or smirk...or sleep. Leave it to a pro to prove me wrong! (Which is why I have no plans of breaking away.) The exercises I was given to do did not involve working one side of my face differently from the other. They involved working both sides evenly. And guess what...they worked! So had I not been in touch the program author and had tried to use the exercises I know thus far to fix the asymmetry or tried to find my own solution in some other program, I doubt my results would have been this good...because I would never have guessed what I was asked to do with fix the "problem" is what I needed to do.

Here are some photos to illustrate what I mean: As surprising to me as that was, it was not anything new but rather something that is probably genetic because it was still there almost 20 years ago! Now back to that 2015 photo where the asymmetry stood out to me... I must admit that the first time I saw the asymmetry, I was a little baffled about how or why it happened; and as I stated above, I assumed it was a new feature caused by something I was doing differently on (or to) one side of my face and not the other. But after I discovered that it had been part and parcel of who I am, judging from the older photo, I was less concerned, albeit amused that I had never noticed it before. (Kind of like how my eyes changed over the years and I didn't even know it was happening until someone said such things happen. LOL)

And so, per the CFF program author's suggestion, I added the new exercises. For a side-by-side comparison, here are the mirror images again, before and after. 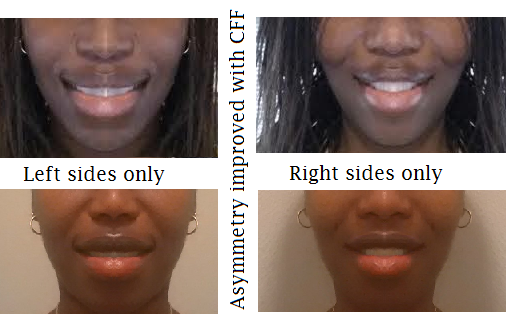 And when you look at the actual photos, you can see that the asymmetry is as undetectable in the later photo as it used to be 20 years ago...at least to me it is. 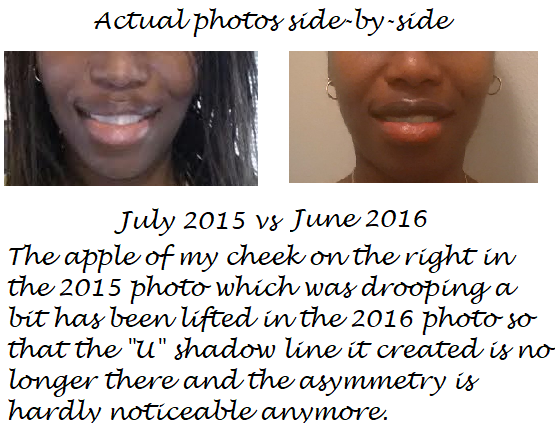 I have always exercised my face the same way on both sides and yes, asymmetry may be caused by other habits or just DNA--which I suspect is my story. Common sense would tell you that there has to be something else I do exclusively on one side to create the imbalance, or there is nothing that can be done because that is how I am. Yet someone well versed in facial anatomy and physiology was able to pinpoint what needs to be done and point me in the right direction. So my belief is that the designers of face exercise programs not only understand the capabilities of their programs, but also are able to decipher why a certain change happens when you are doing their program and what needs tweaking to fix it. So I cannot find a reason not to depend on their guidance, if it is available.

I have been doing Tom's program since 2005, and consider myself to know it by heart. Yet the other day while reading old posts, I came across a post on his regimen and discovered some things I never knew before. So even 12+ years later, I find I still need to return to Tom's instructions to perfect my form. So I am one of those who has no plans of ever graduating from "school" unless I am forced to by something like access to the instructors becoming impossible.

Your mileage may vary, so to each his own.
Top
Post Reply
11 posts